Q Castle in the 21st Century

In 1999 Quentin Castle left his home town of Adelaide to follow his calling as an officer of the Salvation Army. When he returned to Adelaide  a decade later, he awoke to discover that it was the 21st Century.  He now wanders the streets of the future, a  man out of time facing the challenges of the world of tomorrow. These are his adventures........

This was how I felt recently when I made one of my few trips to the city center since returning to Adelaide several years ago. There was a time when I would be in town at least six days a week. Everyday I would pass through town and spend my time browsing in shops between connecting buses. Whether it was during my university days or my teaching career, the streets of Adelaide were my playground, the comic shops and record stores my regular haunts. I had even gotten to know Toys'r'us so well, that when people mistook me in my 'teachery' clothes for a shop assistant, I could direct them to the right isle. 'Pink Power Rangers are in number 3' or ' Biker Mice from Mars toys in 8', I would reply, the town was mine and I knew it backwards. I even had a regular beat that I would walk from King William St to Pultney St, scouring every model shop and book exchange for all manner of sci-fi and pop culture esoterica. I knew the names and faces of shop owners and they new me as a regular. I even had my favourite food outlets that I would frequent. I was the mighty hunter and the arcades of Adelaide were my jungle.

Christmas was always especially wonderful in Adelaide. The giant Santa, aloft the John Martin's building, looked over Rundle Mall like a mighty colossus. It was the pinnacle of the wonders on display in the store fronts of department stores, wonders that  made the city a place to soak in the magic of the season. This was the Adelaide of my youth.

Recently, after being away for so many years, I returned to my beloved home town. No longer do I need to travel through town to catch buses, so visits to the city are far and few between. I had heard recently that the giant Santa was nowhere to be seen at Christmas. I was told that there was a rather under whelming seasonal display presented in the city but I still held out hope for the beloved town of my memories. This hope began to dwindle as I existed a city park house and walked out into Rundle mall for the first time in years. As a child I loved the story of Buck Rogers, an adventurer who  finds that he has slept for 500 years, waking up in the 25th century. Sadly on this trip, this was exactly how I felt. As I exited the lifts of the park house I was struck by the simultaneous familiarity and strangeness of the environment.  There was architecture and fixings that told me I was home but beloved shops and entrances were now gone, replaced by different business's with there own additions to the premises. I stood in an arcade and stared at a doorway that used to be a glass wall, my favourite comic shop was gone. There was also once a  record shop nearby, but the one I came across  wasn't it. Time had moved on, things had changed, the colourful characters that once inhabited them, gone. I had woken up in a future world that had moved on while I had slept.

After I had attended to my business, I went for a walk to find an ATM attached to my regular bank. I was soon frustrated that  I couldn't find one, I used to know where they all were but it had been such a  long time between shopping trips. I decided to ask at an information booth that I knew was at the other end of the mall, only to find that it no longer existed, probably ten years gone. As I continued to seek help, I headed for the one place I knew I would see something familiar, a comic shop. It wasn't the comic shop of my youth but I knew that it would be full of things I found comforting, and I was right. With in moments I was in Pulp Fiction Comics, drooling over the merchandise and listening to some cool music. As I perused the titles on the  shelves, I reflected on my visit and decided that although much had changed, Adelaide was still a great town. The big Santa may have gone but the Malls Balls were still there. My favourite joke shop may have closed but the moon still hung in its orbit. My regular comic shop may be long gone but there were new ones..... and the apes hadn't taken over in my absence. 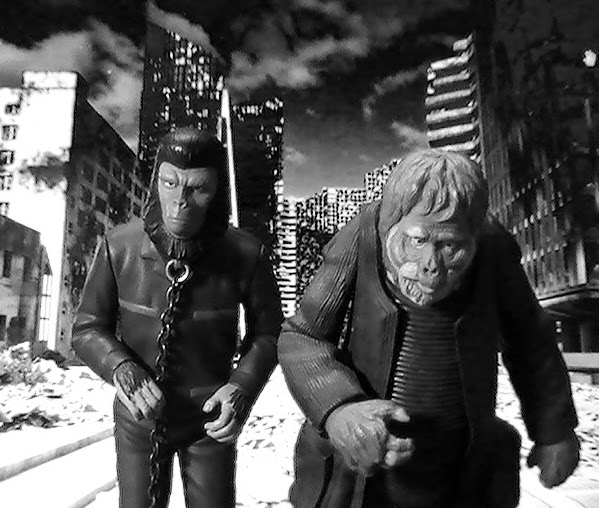 After obtaining some local knowledge in the comic shop, I headed back down  Rundle Mall to the appropriate ATM, which I suddenly remembered, was where it had always been. Some things change, somethings we forget, but this isn't a bad thing. If things never change, if we never change, we stagnate and die. Adelaide's not dead, it's a wonderful town with a wonderful future full of new wonders and magic.

BTW, if you find yourself in Pulp Fiction Comics, ask for a copy of Anthony Castle and Chadwick Ashby's graphic novel DEAD ENDS: Fables of Loss and Morality. It's a great read by two great Adelaide talents (i'm not bias at all).

Posted by House of Castlestein at 09:20