The Beginning
In 1981 I picked up a comic from my local news agency. As a nine year old with a love of the fantastic, I grabbed a comic entitled Hellfire, which featured a horned monster on its cover terrorising  a young couple. It was a striking cover that captured my imagination. I enjoyed reading it (mainly stories about the DC horror superhero, The Demon), but it was the image on the cover that has stayed with me through the years and started me on a strange journey of discovery.

Tarzan the Ape Man (1959)
It was a year or two later that I first saw the film Tarzan the Ape Man (1959), starring Denny Miller as Tarzan . It's at the films climax when Tarzan is saving Jane, her Father and his partner Holt from a fiery sacrificial death, that a large statue of a horned humanoid monster holding a snake is featured. As the film finished I raced to my comic box, feeling I had seen the horned statue before. As I flicked through the stack, I finally came to Hellfire and realised that I had a match. The idol, on whose sacrificial alter the wild inhabitants of the lost city tried to present Jane as a burnt offering, was the same as the one on the cover.

I thought that this would be the end of the appearance of the mysterious statue, however sometime later I sat down on another Saturday morning to watch another epic fantasy movie, director George Pals, Atlantis: the Lost Continent. It was as the characters were entering the temple of Atlantis that something caught my eye, there sitting in the middle of the temple was a familiar statue, the horned man beast from my comic and from the lost city high a top Tarzan's Mutia Escarpment. However here the head of the snake had been removed and replaced with a dome like structure and it appears that another coat of paint had been applied to give it a different look from it's previous appearances.


Until recently the statue had become just a faded memory from my childhood until I was discussing  Denny Miller's Tarzan the Ape Man with fellow fans on FaceBook. It was now that I realised  that I may be able to solve the mystery of the amazing horned idol. After some discussion with my fellow fans, I discovered that the statue originally appeared in the 1955 movie, The Prodigal, starring Lana Turner and Edmund Purdom and Directed by Richard Thorpe (Tarzan Escapes (1936), Tarzan Finds a Son (1939), Tarzan's Secret Treasure (1941) Tarzan's New York Adventure (1942). According to some (www.turnview.com/mudverks/tagged/mgm) the statue is of the Babylonian goddess Astarte. The art direction for this film was over seen by Cedric Gibbons and Randall Duell and it is they that were most probably responsible for the amazing statue. However it is interesting to note that the set decoration was the responsibility of Edwin B Willis and Henry Grace, the latter of which was also the Set Decorator on the other two MGM movies, Tarzan the Ape Man and Atlantis, The Lost Continent.

In the end it seems that Henry Grace was the common denominator in utilising this stunning 11 foot tall and 3000 pound, fibreglass, statue (www.volusiariders.com/49-stories-road/204926-babylonian-fertility-god-demon.html) in several movies produced by MGM and thus increasing the cinematic presence of this amazing product of the Art Department.


The Statues Identity
However as to the statue being Astarte, as The Prodigal evidently suggests, there are some issues, primarily that Astarte is a Goddess, which the statue is clearly not. The horns seen on some statues of Astarte are usually those of the crescent moon, symbolising here royal power, however they are not those of a bull.

It is more likely that the statue is of her male counterpart, the storm god and fertility god, Baal (Lord) Hadad. He, and the many versions of the storm god throughout the ancient near east (ie, Marduk, Teshub, Enlil etc) were usually portrayed as having the horns of a bull and sometimes the body of a bull and at other times, riding a bull. He is often depicted holding a club or mace, as in the above picture, as well as a hand full of thunder bolts.

There is also the accompanying legend of the storm God fighting and defeating the great dragon or serpent of chaos that symbolises the sea, an action which resulted in the appearance of land out of the primordial ocean. In the minds of the ancients, this battle was re-enacted time and time again, when people on the land witnessed the storm raging over the sea, thunderbolts being hurled down from the heavens into the raging waters. In the movie statue being discussed, it is possibly this defeated serpent of chaos that can be seen in its hands of the storm god. Another possibility is that it is the 'Serpent of Splendour' or the Mushussu, often depicted in many Babylonian pictures of the  storm god Bel (Lord) Marduk.

Many of these themes can also be found in the Hebrew Bible and explain the association of the golden calf (although discouraged) with the worship of the Israelite god Yahweh (Deuteronomy 9: 16, 1 Kings 12: 25-30).

At various points he is also depicted sometimes as a storm god, slayer of the dragon and consequently the one who divides the seas to bring forth land (eg. Job 26: 1-14), themes that are also found in the New Testament (Mark 4: 35-40, Revelations 12). As can be seen the power of this mythology and imagery is very strong and continued to persist, entering classical mythology (Zeus transforming into a bull) and even Norse mythology (Thor's wielding of a hammer and battle with the serpent Jormungandr).


Where is he now?
Having now identified the statue not with Astarte, but her male counterpart Baal Hadad
the storm god, the question must be asked, where is the statue now? After sometime surfing the Internet, I managed to piece together some of the statues journey after its movie career ended.
It appears at some point  during the 60's or 70's it ended up in a second hand/junk shop, in Ogletown, Delaware, for several years (www.tsutpen.blogspot.com.au/2012/01/before-and-after-250-babylonian.html?m=1). It was around this time, or at least some time before 1980, that the statue was used as the inspiration for the cover of the comic mentioned earlier. Eventually the statue was sold to a travel agency, Tranquillity Travel, in Dover, Delaware, where it sat out the front of the business on Route 13 (www.tsutpen.blogspot.com.au/2012/01/before-and-after-250-babylonian.html?m=1). It was here that the statue got it's next big modelling gig, appearing on the cover of the Live Skull album, Snuffer, released in 1988. 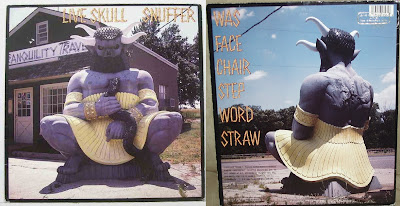 In 2003/2004 the statue was bought by Denney Van Istendal for $5000 in Lumberton, New Jersey, much to the horror of the local community (www.roadsideamerica.com/news/10348). Eventually, after much controversy, the statue was put up for sale again in 2009 and, as of Oct 2011, it appears to have been sold to a bar in Philadelphia (www.roadsideamerica.com/tip/1615). With this news, many questions still remain: where is the bar that owns the statue located in Philly? Will the statue ever be placed in a museum somewhere and restored to its cinematic glory?  Will it ever be reunited with a new snake head and mace? And finally, will it ever make a cinematic comeback? 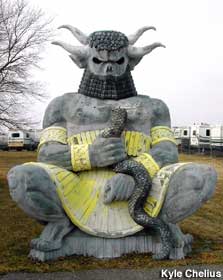 Posted by House of Castlestein at 04:39