The Policeman's Special or Half'n'half: My Festive Drink 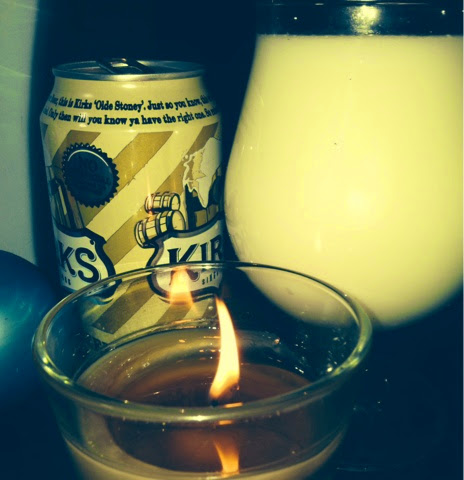 It's Boxing Day and there's a drink I have every year that is special, different and sums up the festive season for me. It is the old Half 'n' half, otherwise known as the Policeman's Special, the drink of champions. I was first introduced to the Police Man's special as a child, gained a taste for it and loved it ever since. It's origins for me are lost in the mists of time, but I can tell you where I came across it. In the east end of Rundle St, Adelaide, South Australia, there was an old grocers shop, Randall's Fruit and Veg (or Frut and Veg according to the dilapidated sign out the front). Run by Mr Randall, it sold all kinds of things from basic convenience items to sweets and a whole range of things in between. One of the most popular features of Mr Randall's shop was his ginger beer on tap that saw a range of city dwellers, from police officers to Hare Krishna's, frequenting the place for a draft of this wondrous drop. It was in the mid-seventies that my family moved church congregations from the Salvation Army Unley to the Salvation Army Adelaide Congress Hall which was located in the east end of the city square mile. Not far from the Adelaide Citadel was Mr Randall's shop and the informal initiation into the the Adelaide Congress Hall Salvation Army Band was to drink a pint of the mystical Half'n'half. A yard glass was even available for the more daring who thought they were man enough ( no women in the band then) to take on challenge. Although my father found the drink repulsive, it became a firm favourite of my brother and I.  Every Friday night, following the young people's band and choir practice at the Salvation Army citadel, our father would take us to Mr Randall's shop to get a pint of Half'n'half and a strap of the usually stale and tough licorice which was just gold. To us this was heaven and almost worth missing out on The Incredible Hulk TV show each week in the days before VCRs. We would climb upon the ancient counter stools fixed to the wooden floor and drink our pint of Half'n'half. We would then walk back to the car, eat our licorice strap and dream of the wondrous Saturday morning cartoons waiting for us on the other side of sleep.

By the mid 1980's Mr Randall's shop had gone. Mr Randall had retired and the shop that replaced it, which also sold Half'n'half, didn't stand the test of time. We too had moved on to comics and milkshakes, bought each Friday night from a deli/milk bar nearer to home, but the dream lived on. Each year at this time, when we don the gay apparel and troll the yuletide carol, I drink a glass of Half'n'half in memory of Mr Randall and the old days of the 'Frut and Veg shop'. Why this time of year you may ask? Because all the ingredients are here, bought for Christmas day lunch and ready for the mixing. And what is this mystical recipe you may ask? Well I've included it here for the curious and daring.

Method
1) Pour the milk into a glass.
2)  Add the ginger beer.
3) Wait till a curdled head begins to form and drink.

And so there you have it. I hope you enjoy a pint or two of Half'n'half and that God brings you lots of hope, peace, joy, love and Santa this Christmas and New Year.

Posted by House of Castlestein at 12:27