Jesus And The Rings Of The Phantom.

One of the greatest masked superheroes of the modern age is the Phantom, the Ghost Who Walks, friend of the Pygmy Bandar and the Guardian of the Eastern Dark. Older than Batman and Superman, he has graced page and screen for nearly 80 years. One of the strengths of the character is the faux mythology that has been built around the character that links him into myth, legend and history of the real world. Whether it be Arthurian, Greek or Roman legends, this scourge of piracy has a connection to it all.

While browsing through that font of all wisdom, Wikipedia, I discovered that when it comes to Christian history and theology, this is no less the case.  The most direct link in Phantom law to the the Christian faith are the two rings he uses in his battle against evil. The first ring we will focus on is the Good Mark Ring. Many do not realize the significance of the symbol on the ring and the depth of meaning behind it. It has been described as the crossing of two sabers however the design has an ancient origin, The symbol's origin is Greek and was traditionally known as the Chi-Rho. It was used by ancient Greek scholars to mark valuable or noteworthy passages in the margins of a text. It combined the two letters X (Chi) and P (Rho), the first two letters of the Greek word 'chreston' which meant 'good'. It was literally the 'good mark'. The Chi- Rho eventually went on to be used by the early Christians as a symbol of Christ. The original Greek form of Christ, 'Christos', also began with XP. This, coupled with the cross shape recalling the crucifixion, made it ideal for use by the early Christians.  This use as a symbol for Christ can still be seen in the word 'Xmas', the common abbreviation of Christmas. It was the Chi-Rho symbol that the Emperor Constantine reported seeing  in his vision that led him to accept the Christian faith as the official religion of the Roman Empire. Through the years, the Chi-Rho was adapted into many stylistic designs by the church and became one common version of the Christian Cross motif. It is of no coincidence then that when the Phantom was looking for a symbol to represent his protection, he literally chose to use the 'good mark'. Either that or Lee Falk and Co. did their research well.
The origin of the Skull Ring has an even closer affiliation with the Christian faith, that of Christ himself. The mythology, as set up in the unfolding narrative of the comics, is that the Skull Ring was presented to the original Phantom by the great physician, scientist, and occultist, Paracelsus. It was fashioned from the nails that held Jesus on the cross and was originally owned by Emperor Nero, who had led one of the early Roman persecutions of Christians. This reappropriation of crucifixion nails for other purposes was not unheard of. The nails used in crucifixion were iron spikes between 5-7 inches long and were often collected and highly prized  as healing amulets. Like the legendary Holy Grail  that was pressed into the service of King Arthur, the Skull Ring is a relic of Christ that continues to be used in the cause justice and redemption of a fallen world, or so the ongoing chronicles of the 'Ghost Who Walks' tell us. 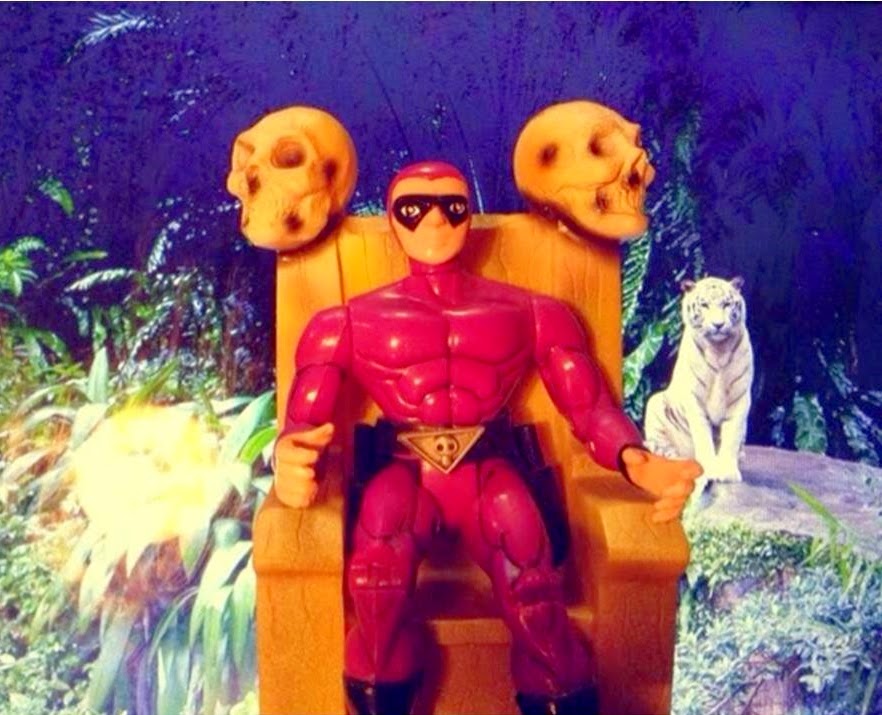 Posted by House of Castlestein at 20:04