The Gates of Hell Shall Not Prevail

I was stunned to notice this week that the Gates of Hell have been unearthed by a team of  Italian archaeologists. As I read the headlines my heart skipped a beat as two thoughts crossed my mind. The first thing was that I finally would know how to get to Hell, Hades in the Greek, if I ever needed to go save someone. I love those stories where the hero must ascend to the underworld to save a loved one who has been wrongfully stolen by death.  Like the hero Orpheus in Greek mythology, with a hand full of loose change, I could brave the River Styx (however, as Chris De Burgh once sang, don't pay the ferry man till he gets you to the other side). I could sing AC/DC songs to put Cerberus, the three headed hell hound, to sleep. Another thing I must remember to do when storming Hades is not to look into the Slough of Despond or I too may never get out alive (or is that from Pilgrims Progress, I get so confused). At this point it may sound as though I know my Orpheus very well or that my knowledge of the Netherworld is more than it should be (the temptation to write nether regions there was extremely great). However I have a source of knowledge on my side that can beat no other when it comes to knowing about doing commando raids on Hell,.......sword and sandal films. Films like Hellhounds (2009), The Scorpion King 2 (2008) and Odysseus: Voyage to the Underworld (2008) aren't bad, Percy Jackson and the Lightening Thief (2010) is fun, but the classic is Mario Bava's atmospheric, Hercules in the Haunted World (1961). With body builder Reg Park as Hercules and Christopher Lee as the evil King Lico, it's a sensational and atmospheric peace of fantasy film making.
﻿

The second thought that ran through my mind was the appropriateness of this being announced at Easter, when Christians in the Western churches are celebrating the death and resurrection of Jesus Christ who, they believed  'descended into Hell;  (and) on the third day....rose from the dead (Apostles Creed). In Christ, Christians see one who has loved them so much that he stormed the world of the dead to lead them into the way of life. Jesus said of St Peter's faith in him, 'on this rock I will build my church, and the gates of Hades will not overcome it (Matthew 16; 18).' Whether it be the act of death and resurrection, or the life giving faith of his people, Jesus and Hell storming go together. 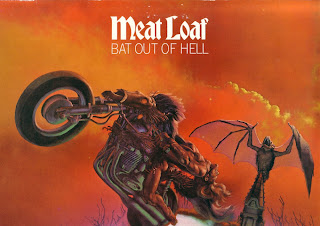 So before I present myself as a Meat Loaf wannabe roaring out of the gates of Hell 'like a battering ram on a silver black phantom bike', I had to find out exactly what this gate of Hell was. In fact the sight known as  Pluto's (Hades') Gate was uncovered in Turkey at Pamukkale, known in the ancient world as the great temple complex of Hierapolis and famous for its hot springs.

I might also take a moment at this point to explain that the Pluto referred to here is not Mickey Mouses' dog or the planetoid, but refers to the Greek God of the underworld, also known as Hades, just as the whole world of the dead was known as Hades.
Hell, the English name for this realm, is taken from the name of the old Anglo-Saxon goddess Hel, who was the ruler of the world of the dead, Helheim. In The Old Testament this realm was known as Sheol (often translated 'the grave') and it was seen as a world of shadows and darkness. The realm that Christians usually think of when they say Hell, the place of eternal imprisonment for fallen angels, the belligerently evil and unrepentantly wicked, is more correctly known as Tartarus in Greek and Niflheim in the mythology of the Anglo-Norse, that informs much of our traditional English theological terminology.

These Turkish Gates of Pluto, are actually a subterranean vent that emits Carbon dioxide into the atmosphere. A recent news report stated,


'A staired terrace overlooking the temple and pool would have held onlookers and initiates    as eunuchs led bulls into the cave - and dragged them out, dead. Francesco D'Andria of the University of Salento said the "visions" were probably hallucinations caused by breathing diluted fumes wafting up from the Gate to Hell. And the portal is still a killer, he said."We could see the cave's lethal properties during the excavation," D'Andria told Discovery News."Several birds died as they tried to get close to the warm opening, instantly killed by the carbon dioxide fumes."The site had been damaged by Christians in the 6th Century and the destruction was completed by later earthquakes."We found the Plutonium (Pluto's Gate) by reconstructing the route of a thermal spring," D'Andria said.' (http://www.news.com.au/travel/news/archaeologists-have-uncovered-plutos-gate-an-ancient-gateway-to-hell-in-turkey/story-e6frfq80-1226611365115?from=public_rss)


After reading this I get the feeling that any sortie into this infernal gateway would be sorely disappointed. I suspect, rather than ferry men, three headed dogs and underworld celebrities one would be met with unbreathable air and  dark caverns which, instead of leading to the place every one must go after paying their taxes, would lead to more unbreathable caverns, hot water and eventually lava. But one thing is sure, a voyage to the world of the dead probably would result, one I would never come back from. Although I'll still put the Plutoneum on my list of places to visit, it is at this point that I think I'll leave the sorties into Hades to the veteran himself, the one who said through the visions of St John, 'Do not be afraid. I am the First and the Last. I am the Living One; I was dead, and behold I am alive for ever and ever! And I hold the keys of death and Hades (Revelations 1: 17b-18). '


Posted by House of Castlestein at 00:31