Where the fang is Visaria?

The Regional Anthem of Visaria
There is a land where winter skies,
Resound with wolf and vulture cries,
Thunder and lightening paint the clouds,
those dark grey clouds.
Where misty swamps and mountain crags,
Are crowned with bats and alpine stags,
And here we sing before that ancient flag,
Visaria, Visaria, Visaria
(Translated from the High German). 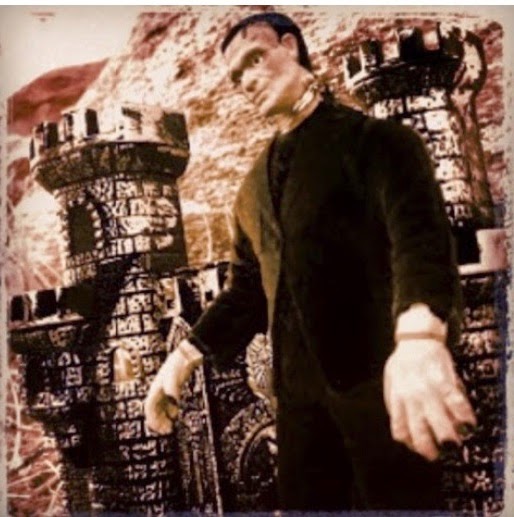 The Forgotten Land of Visaria
As I was growing up there were many ancient lands spoken of by my family. My mother and father told me about our family origins in the UK. There were stories passed down about my Cornish, Irish, Scottish and English ancestors and the way they forged a new life in Australia. Then I married into a German family and began to learn about a whole lot of places on the other side of the English Channel, such as Switzerland, Austria, and Bavaria. Eventually I met someone from Transylvania and read up on the histories of that ancient land and the tales of the infamous Prince Dracula and Countess Bathory. However amongst all this discussion of European regions, there was one land that no one ever talked about.

Visaria
It was In the 1980's I first heard the name of the mystical land of Visaria. This forgotten region is little known by many and its mention is only found in important film texts from the 1940's. The occasion of my first hearing of Visaria was on Peter Goers' Late Night Horror Show on Channel 10, Adelaide, South Australia. That evening he was presenting a screening of Frankenstein Meets the Wolf Man (1943), the first meeting of two Universal monsters in one film. As a child, cartoons and other programs had convinced me that it was Transylvania that was the scene of the Universal Monster's horrible supernatural crimes but here I began to see otherwise. Visaria, this land of 'hills, mountains,..forests (Ghost of Frankenstein (1942)', and festive villagers, was also a mecca for mad scientists and monsters alike.

Document 2: Frankenstein Meets the Wolf Man (1943)
In Frankenstein Meets the Wolf Man we discover that Ludwig's sanitarium is also known as Frankenstein's Castle and that there is a mountain stream that runs beneath the castle and drives the  turbines that power the laboratory. This stream is dammed, the wall of which can be seen adjacent to the castle. This dam is eventually blown up in an attempt to kill the Wolf Man (Lon Chaney Jr)  and the Monster (Bela Lugosi), washing the remains of Ludwig's castle away. It's in this movie that we get exposed to Visaria's wonderful alpine culture with its depiction of a boisterous village festival. We also get to hear a rousing rendition of the the Visarian folk song 'Faro-la Faro-li'.

Document 3: House of Frankenstein (1944)
In Document 3, the Monster (Glenn Strange) and the Wolf Man are found frozen in the bowels of the original Frankenstein Castle. The icy discovery is made by the insidious Visarian scientist , Dr Gustav Neimann (Boris Karloff) and his hunchbacked assistant Daniel (J. Carrol Naish). This is remarkable seeing as they were last seen battling in Ludwig's castle in Visaria, a town shown here as being some 152 km away by road. The ruins of the original Castle Frankenstein appear with a ruined dam wall reminiscent of Ludwig's Castle. At this point it could be suggested that the writers have actually fiddled with the details put forward in the previous installment to serve their new narrative direction.  Perish the thought. An analysis of the details in the text suggest that there may have been ancient tunnels and glacial caverns linking the two ancestral fortresses of the Frankenstein family. The villages of Frankenstein and Visaria were geographically close, separated by an alpine ridge that can be crossed on foot or by a 152 km journey by road through the nearest alpine pass. When the dam was destroyed in Visaria, the Monster and the Wolf Man were washed through the subterranean tunnels into the cavern below the ruins of the original Frankenstein Castle. This explosion also overwhelmed the second dam wall on the Frankenstein village side. This dam was once a prime example of the rare double wall dam design unique to Visarian/Frankensteinian alpine architecture. It also a prime example of the needs of alpine experimental brain surgeons driving hydroelectric technology.

Document 4: House of Dracula (1945)
It's in Document 4 that we discover that Visaria is also located in a coastal region. Here we are introduced to Doctor Franz Edelmann (Onslow Stevens), another Visarian brain surgeon, whose house and practice are situated near the Visarian coast. The action starts when Count Dracula (John Carradine) arrives at Edelmann's house claiming to seek a cure for his vampirism. Not long after, Lawrence Talbot, the Wolf Man, also arrives looking for an answer to his supernatural curse. Before long Dr Edelmann is vampirised by Dracula and Lawrence Talbot tries to end his life by throwing himself into the ocean. While rescuing the Wolf Man from his failed watery suicide, the skeletal remains of  Doctor Niemann and a dormant Frankenstein Monster are found in a coastal cave. The Monster and  Dr Niemann had met their demise in the previous installment by sinking into a pool of quick sand, eventually emerging in the cave. Soon Dracula is dead, Dr Edelmann has turned into a homicidal mad scientist vampire and the Monster is laid out in the laboratory ready to be revived. When the curtain comes down on this installment the house is in flames as a hostile village mob storms the premises to send the Universal monsters to a fiery demise.

Where is Visaria?
The House of Dracula is the last we hear of Visaria. Soon the Universal Monsters had shifted to America and left their European homelands far behind (Abbott and Costello Meet Frankenstein (1948). But where is this region of Visaria to be found and how does one book a holiday there? When we look at an atlas some related landmarks jump out. First of all there is Castle Frankenstein located in the west of Germany in the State of Hesse and the Village of Frankenstein located to the east in the State of Saxony. In the South there are the Alps located in the State of Bavaria and the ocean in the far north. As exciting as it is to pinpoint these places, it becomes quickly apparent that the region Visaria is a geographical impossibility. Visaria is located in a fictional Germany of the imagination. It is found in a 1940's American dream of a Europe that is free of war and where the only evil to be found is of supernatural and fantastic origin. In Visaria there are no jackboots only the asphalt-spreader's boots of the Frankenstein monster. In this far off land the only bullets fired are those of silver and not of Nazi lead. In the wartime Europe of the imagination, mad scientists are obsessed with creating artificial life and not death on a massive scale. The only way to holiday in Visaria is to find a copy of these cinema classics, grab some popcorn and while away the hours in the company of The Monster, The Count, The Wolf Man and the feistiest village mob this side of Transylvania. Faro-La, Faro-Li!

Posted by House of Castlestein at 03:33