Recently it was Elvis' birthday. On the 8th of January this year, Elvis Aaron Presley would of been 79 if he was still alive...or would come out of hiding. I clearly remember the day he died. I was 5 years old and in my first year of primary school. Even at such a young age I knew that a living treasure had died and that some things would never be the same again. A few years later I remember watching my younger brother play with his Elvis Paper Doll Activity Set and explaining to him who Elvis was, soldier, movie star, King of Rock-n-roll, and why he wore such amazing sequined jump suits. But what many don't realise is that Elvis and I have a lot in common and a connection of sorts. We are both male, singers, wear jeans and married beautiful women. I own a copy of Bubba-Hotep. He was a king and I am a Castle. I even got to impersonate him as 'The Pharaoh' in an amateur production of Joseph and his Technicolour Dream Coat back in 94.  Outside of these ties that bind me to the King, I didn't believe there could possibly be much else.  I was wrong, oh so wrong.

I strongly believe that some places on this earth are nexus points of mystical and mythic power. Places such as Loch Ness, Castle Frankenstein and Hanging Rock are places where fact and the fantastic caress each other in an intimate embrace.  I believe that in Adelaide, South Australia, Semaphore Beach is one of those places. In fact in my own life, Semaphore Beach has conspired to draw my fate together intrinsically with Elvis, the King of Rock and Roll.  You may ask 'How can that can be?' I will now tell you the fantastic tale of manifest destiny that drew us together.

Recently I was visiting my brother who lives not too far from Semaphore Beach. We were talking about the local seaside carnival and the vintage carousel that's been there for years. This beautiful merry-go-round has been on the Semaphore foreshore for the last for 76 years. The carousel was built in by Len Northey in the 1920’s as was one of earliest electric powered models. With its forty handcrafted horses, it is said by some to be the largest operating carousel in , beating all other takers by four wooden ponies. Originally situated at , the carousel was moved to the Jubilee Oval for six months during an expo in 1936 and then found a new home in it’s current location in 1938 (http://www.abc.net.au/local/stories/2008/11/09/2414408.htm).


On top of my city's sentimental love affair with the sideshow ride, I also had my own connection to the carousel. Back in 1995, my first year out teaching, I was given the lead role in the school production of Carousel. The character I played was that of a handsome carnival roustabout, Billy Bigelow, who uses his sex appeal to entice young ladies onto the ride. It's while he is working that he meets and falls in love with, Julie Jordon, and love soon blossoms. Incidentally, the role of Julie was played by Jo Lawry, at that time a final year student who's currently carving out a successful career as a vocalist singing back-up for Sting (see Jo in the Oscar winning documentary 20 Feet From Stardom (2013). However Billie and Julie's romance is frowned upon by those around them, and through a series of related circumstances, they find themselves unemployed.  Soon the couple are married and Julie falls pregnant. Upon hearing the news of his impending fatherhood, Billy is over whelmed with the responsibility of being a parent, especially if the child is a girl. This sense of responsibly misguidedly leads Billy to his tragic death in a robbery aimed at ensuring his child's financial security. Following his death, Billy finds himself in heaven with a chance to return to earth to try and guide his young daughter through to a better life.

With the option of building a full size carousel well outside the meagre school production budget, the director opted to open the show with a silent film that showed the meeting of the two leads on the carousel. And so it was on one sunny afternoon that some of the cast, and a film crew from the school media department, headed down to Semaphore to film the opening sequence on the Semaphore carousel. There I was, playing a carnival roustabout for the cameras, pretending to romance my leading lady, while riding the Semaphore carousel. There I was, a cinematic legend in my own lunch time, being recorded for posterity on celluloid (well video tape anyway).


As I pondered these sweet memories, the discussion with my brother turned to the ferris wheel that is also a permanent fixture on the foreshore. As he did so, a bombshell was dropped that sent ripples through mystical realms. This ferris wheel had cradled the very royal backside of the King of Rock-n-Roll himself. Now I knew that Elvis had never performed in Australia and even if he had, a trip to Semaphore probably wasn't on the cards. So what was the story with this chunk of Elvis history? In 1964, Elvis appeared in a movie called Roustabout. The movie tells the story of a singing biker, Charlie Rogers (Elvis Presley) who gets work at a traveling carnival. After being run off the road by an angry Father (Leif Erickson) who has caught him flirting with his daughter Kathy (Joan Freeman), Charlie gets work as a roustabout at their family carnival while he waits for his bike to get repaired. It is here that he meets the tough carnival owner, Maggie (Barbara Stanwyck), who is also Kathy's mother.  (IMDb Plot: Roustabout (1964). Of the story IMDb says,

Along the way, Charlie (who's got a chip on his shoulder about being an orphan) somehow learns about family values from this vaguely dysfunctional one (IMDb Plot: Roustabout (1964).

It was in a scene with Freeman that Elvis rode what would become the Semaphore ferris wheel and serenaded her with the the song  It's a Wonderful World. The scenes featuring the ferris wheel were filmed in a cow paddock in Seven Oaks, California, with the King riding in carriage number 2. But how did the ferris wheel come to be at semaphore 50 Years later? It arrived in Australia in 2000 when it was featured on a barge under the Sydney Harbour bridge during New Year Celebrations. In 2004 the 12 carriage ferris wheel was given an over haul with new carriages and came to reside in its current location.
(http://www.waymarking.com/waymarks/WMBYN7_Elvis_Ferris_Wheel_from_Roustabout, https://www.portenf.sa.gov.au/webdata/resources/files/sem_bro_FINAL_PRINT_Julie2.pdf) 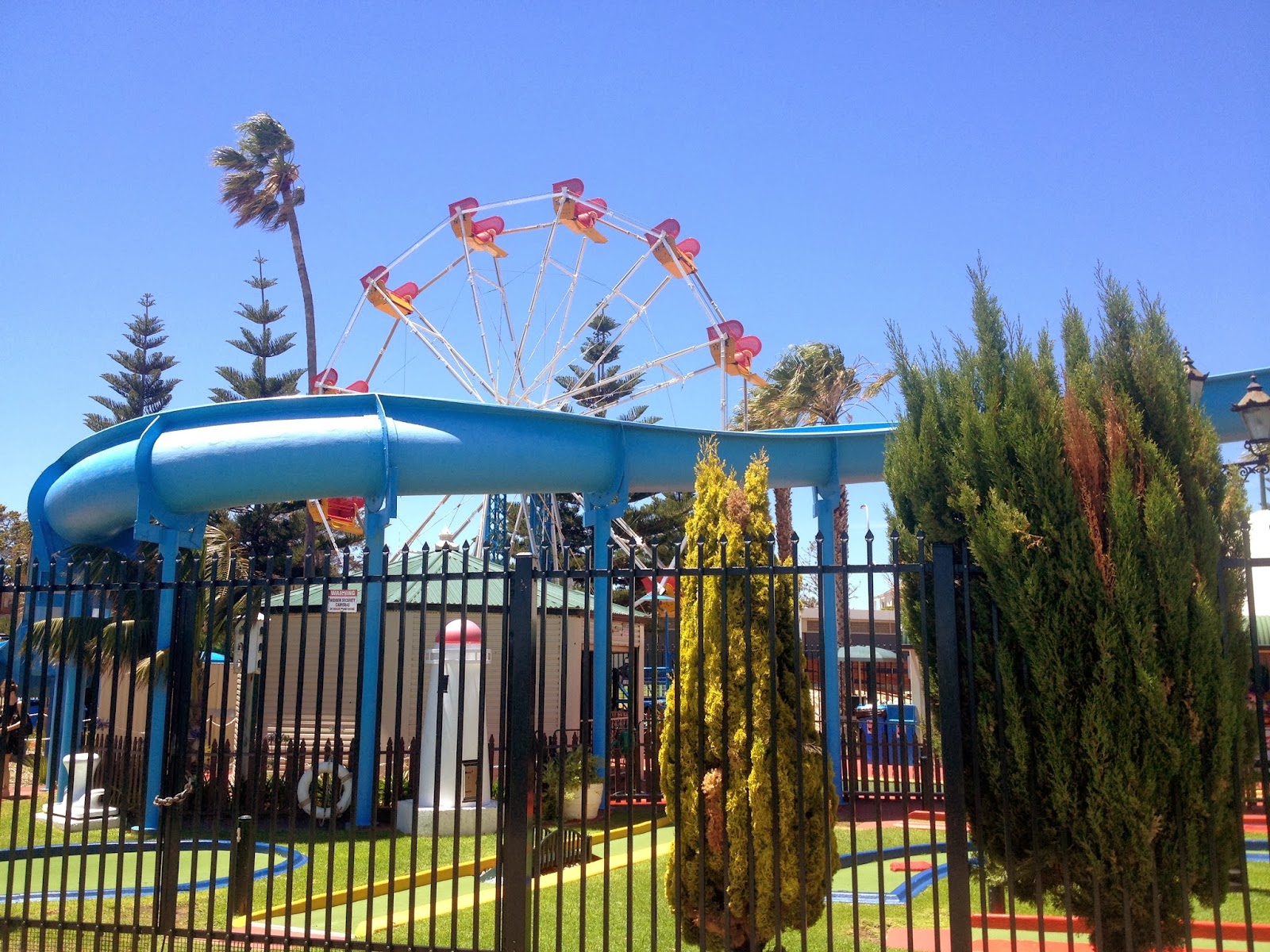 A few weeks later I returned to Semaphore and began to ponder these two wonderful artefacts of carnival history before me. It was there, surrounded by seagulls and sideshows, that I began to feel chills running up and down my spine.  Elvis and I were now connected by a strange cord, woven in the mystic merry-go-round that is the Semaphore Carnival. Both Elvis and I had played carnival roustabouts on film in stories that had explored the concept of the itinerants search for home and family. Both of us had ridden a carnival ride to woo our romantic leads and now these rides were only metres from each other. Both rides had searched for a home and had found it at Semaphore, ferris wheel here, carousel there. Roustabout here, roustabout there. Elvis here and me there. I even owned a copy of Joan Freeman in Friday the 13th: The Final Chapter. Could this be coincidence? I think not! Elvis and I were inextricably connected once again, separated by time but not by space. The long bow of destiny had been drawn. 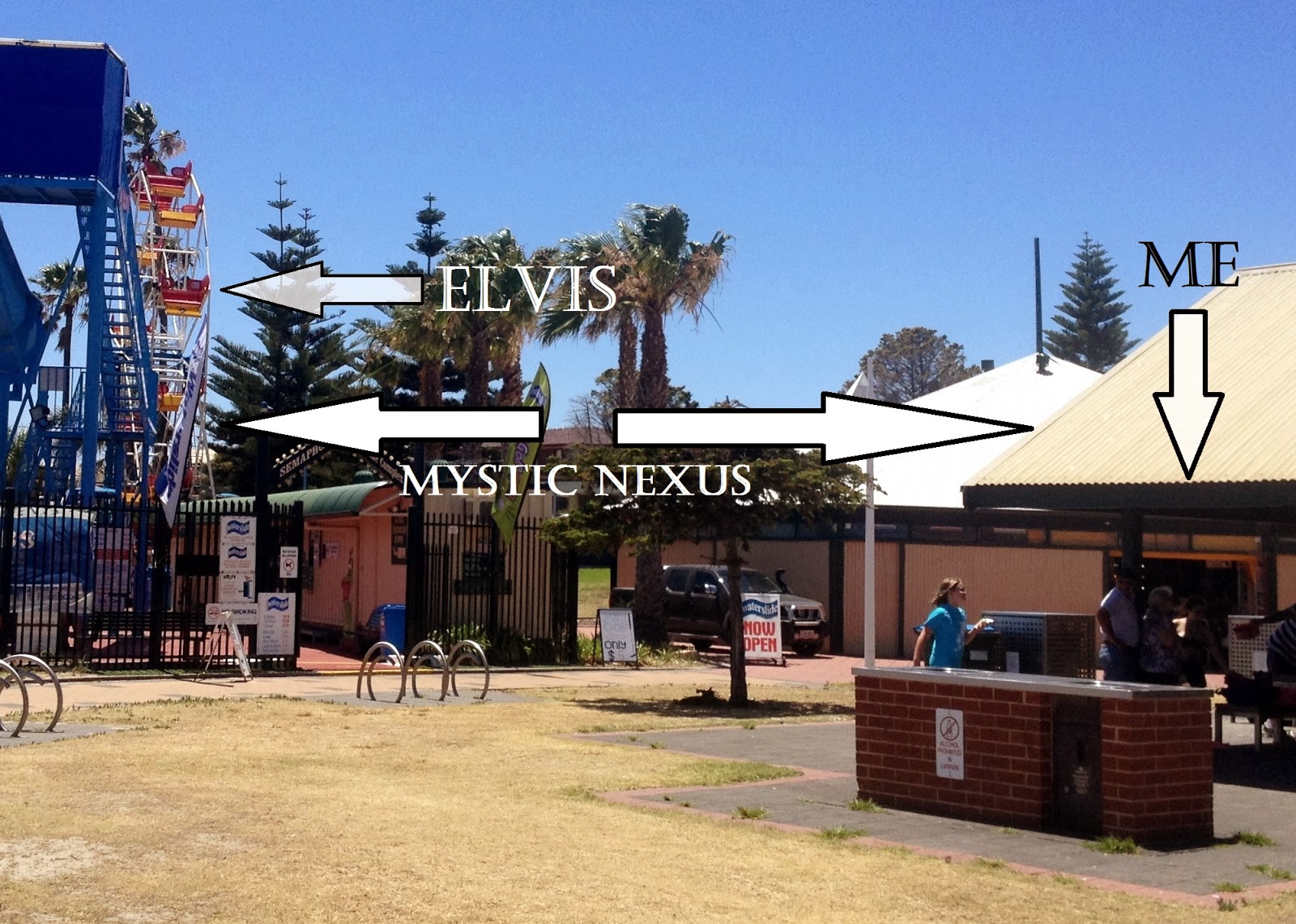 Sometimes at night when I close my eyes, I begin to hear the haunting music of the carnival steam organ. Once again I am there, riding the carousel as the sun slowly sets. As my horse circles round to the front of the pavilion, I look over and see Elvis coming over the top of the ferris wheel. We both look at each other, wave and share a knowing smile, aware that we are inextricably linked forever. And on we ride, long into the night...... 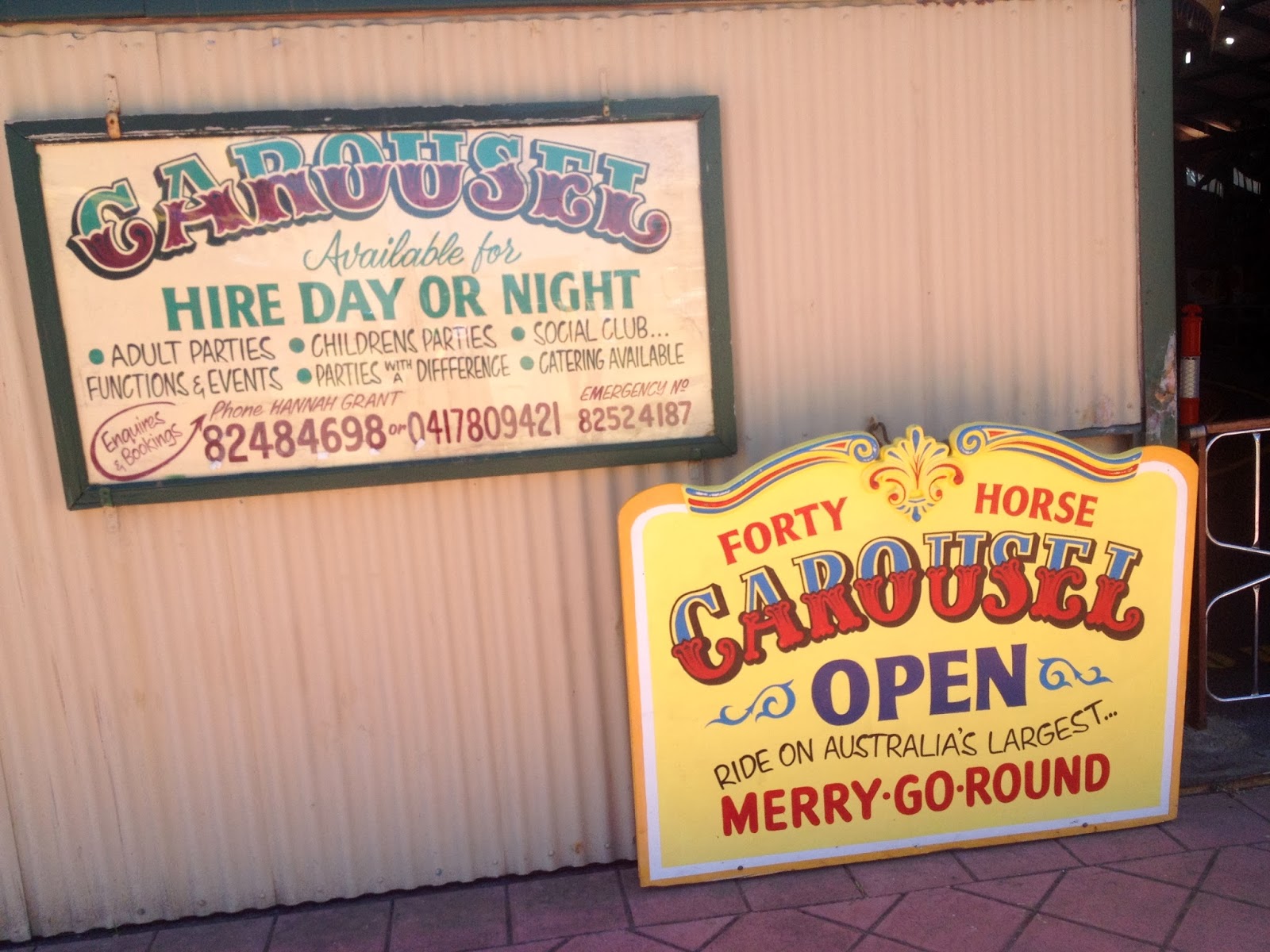 Posted by House of Castlestein at 01:11