Tarzan the Apeman (1959): Tarzan and the Period Drama 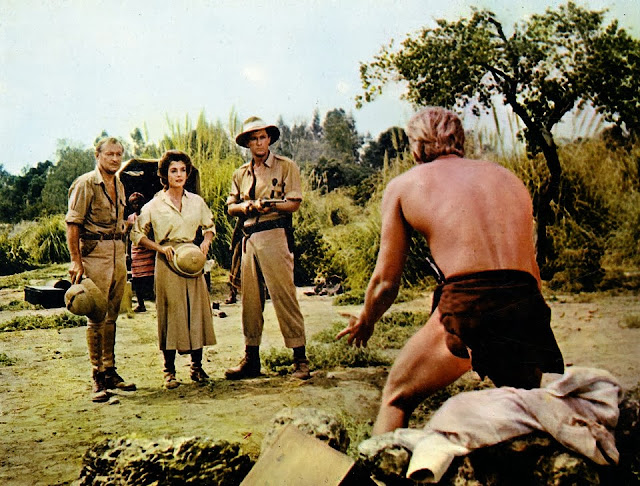 When one thinks of a period piece certain names come to mind. Jane Eyre, Pride and Prejudice, Sherlock Holmes and many of the other names of classic English literature from the Victorian Era and there abouts would probably be on the list. However it wasn't  until 1959 that Tarzan also joined these giants of period drama, a move that would prefigure much of the approaches taken to the character on screen through the 80's and until the present time. 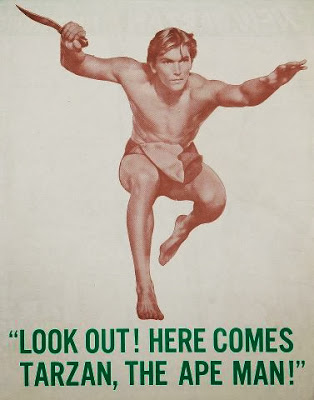 In 1958 producer Sol Lesser, who had owned the movie rights to the Tarzan character since the early 1930's, decided move on from producing the screen adventures of the Lord of the Jungle. During a period of 10 years, Lesser, for a fee, had allowed MGM to make their famous Tarzan series starring Johnny Weissmuller. In 1943 Lesser had continued making the series himself, initially with Weissmuller, when MGM had decided to drop the series. After producing 14 more Tarzan features, Lesser himself, after unsuccessfully trying to bring Tarzan to television, now wanted to move on from producing Tarzan. It was at this time that Lesser sold the rights to fledgling producer Sy Weintraub, who promptly set about revamping the series to great success. But MGM had plans of it's own. After distributing the last two Lesser Tarzan projects, MGM had renewed interest in the character it had brought to the world of sound in 1932 and sought to make another feature of their own before the rights changed hands. This decision did not please Weintraub, who initially threatened litigation against MGM, however the studio continued to go ahead with their plans.  The new low budget movie was to be produced by B movie specialist Al Zimbalist, famous for classic B movies such as the Robot Monster (1953) and King Dinosaur (1955). Zimbalist was in the process of producing a series of low budget features set in Africa, utilizing footage from 1950's King Solomon's Mines. Other films in this group were Watusi (1959), a sequel to Kings Solomon's Mines, and Drums of Africa (1963). The new Tarzan film would also feature footage from King Solomon's Mines and would be helmed by Joseph M Newman, director of the sci-fi classic This Island Earth (1955). The production would be a remake of the MGM hit, Tarzan the Ape Man (1932), which itself was a loose adaption of the original Tarzan novel by Edgar Rice Burroughs. Although a remake, it was the first time that the origin story of the Ape Man, at least the origin of his discovery and relationship with Jane, was to be shot in colour. Tarzan the Ape Man premiered in 1959, the same year that Weintraub released his Tarzan's Greatest Adventure, starring Gordon Scott in his fourth outing as the Ape Man.

In spite of its low production values, the movie featured a solid cast that brought a sense of class to the proceedings. Up and coming actress Joanna Barnes took the role of the world weary Jane Parker, who arrives in Africa to meet up with her adventurer father, Col. James Parker (Robert Douglas) when her finances, and fiancé, have run out. Italian actor Cesare Donava brought a very European take to Harry Holt, Parker's business partner and suitor for Jane's affections. The cast also features Thomas Yangha as Riano, a Watusi who leads the Parker expedition to the legendary Mutia escarpment, the gateway to the fabled elephant's graveyard. However the title role of Tarzan was given to contract player and UCLA basketballer, Denny Miller, who, in his third acting role, would have the distinction of being the first blonde Tarzan. Despite having little to say, Miller had a great screen presence which enabled him to deliver a likable performance as a strong but endearing ape man. His portrayal of Tarzan would also see the return of the classic MGM Tarzan cry which was last used in Tarzan's New York Adventure (1942). The movie also features an excellent jazz score by Shorty Rogers, that drives the movie along, beautifully underscoring the exotic locations and action in the film. 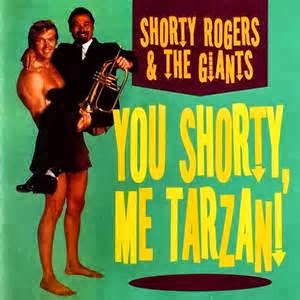 The plot by and large follows that of the original 1932 version. Jane and company head off to climb the Mutia escarpment in order to locate the elephants graveyard. On the way Jane meets Tarzan, who kidnaps the beautiful stranger and takes her back to his tree house and ape family. Tarzan, clearly taken with the strange female. eventually convinces Jane that he means her no harm and receives his first lesson in the English language.  Eventually, while Tarzan is away, Jane is discovered by Parker, Riano, and Holt, the latter shooting one of Tarzan's ape tribe, and then firing at Tarzan upon his return. As the expedition leaves, Tarzan follows the group over the escarpment and arrives in time to rescue some of them from a savage tribe of pygmies who are determined to sacrifice them to the fires of their horned God. In the end only Holt, Tarzan and Jane survive to see the elephants graveyard, with the latter two choosing to stay in the jungle together. In the end only Holt leaves the jungle, returning to civilization with his fortune in ivory. Unlike the original, where the majority of the action, including the discovery of Tarzan, takes place on top of the Mutia escarpment, the first half of this  movie is set in the low lands. Here the climbing of the alp like escarpment marks the second stage of the narrative, which sees Jane and the Parker expedition seek after the elephant's graveyard and Tarzan, with some help from Cheeta, seek after the strange but beautiful stranger.

Much of the criticism levelled at this film is due to its use of stock footage. Especially noticeable is the use of black and white footage from Tarzan the Ape Man (1932) and Tarzan and his Mate (1934). Although attempts were made to make it blend in with the colour footage through the use of colour tinting, the end result is at most times unconvincing and jarring. However the use of colour stock footage is a different matter. The use of footage from King Solomon's Mines fits into the new movie seamlessly and if anything brings to the movie a bigger visual scope that it may not have had other wise. In order to assist in the combining of footage, the costumes from King Solomon's Mines were duplicated for the characters of this film, an economical decision that actually had the unintended effect of making this film an important film text within the Tarzan corpus. Until Tarzan the Ape Man, Tarzan had  always been presented as a modern character. Even the films that were released over the following decade would work hard at establishing Tarzan as a character quite at home in the world of the 1960's. But Tarzan the Ape Man is a period piece, seemingly taking place, as King Solomon's Mines and the original Tarzan novel does, near the turn of the last century. This idea of Tarzan as a period character would eventually take root during the 80's and 90's, when films like the next remake Tarzan the Ape Man (1981), the Stanley S. Canter produced duo Greystoke: The Legend of Tarzan (1984) and Tarzan and the Lost City (1998), the 3 Disney's Tarzan animated features, and Joe Lara's TV series Tarzan the Epic Adventures (1996), all presented Tarzan as taking place during the very early years of the 20th century. Even the most recent attempts at bringing a new live action Tarzan feature to the screen seem to have been toying with a period setting.

Far from being just another B jungle flick, Tarzan the Ape Man is an enjoyable instalment to the series that, although suffering at times from the limitations of it's budget, presents some firsts for the series. The most influential of these is the presentation of Tarzan and Jane as period characters, an approach that has continued to flourish until the present era. 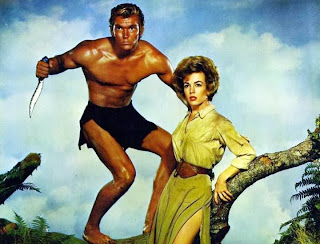 Last year we saw the centenary celebrations of Tarzan of the Apes. But the milestones for the character this decade are not over. 2018 sees the 100th anniversary of Tarzan on film and to celebrate this milestone I would love to see this movie, Tarzan the Ape Man, officially released on DVD and finally given the treatment it deserves. Just as Star Wars and some episodes of the classic low budget Sci-Fi series Doctor Who have be given recent make overs, I would love to see this movie attended to with some of the SFX healing power that digital technology can bring. I would love to see the black white stock footage colourised, taking colour cues from the rest of the movie. I would love to see the scenes featuring super imposition tinkered with digitally to decrease the obvious contrast between the combined images. I would even love to see the scenes with both black and white footage with colour super imposition attended too  Finally, as cute as it is, there's a certain rubber leopard that needs to be replaced by footage of a real one. I know that this sounds like the daydreams of a fan and to some may seem like trying to needlessly undo history. However I have great affection for this movie and even the original novel, Tarzan of the Apes had the opportunity to be revised, seeing Sabor the tiger replaced with Sabor the lioness. All I ask is that Tarzan the Ape Man gets to have the same opportunity

Posted by House of Castlestein at 06:34