The Revenge of Tarzan's Revenge (Part 2) 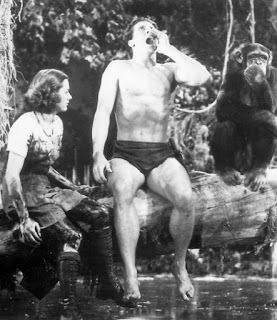 In 1938 producer Sol Lesser bought out his next sojourne into the world of Tarzan, Tarzan's Revenge. One of the benefits of feeding off the success of the bigger budget MGM Tarzan films was that certain successful elements could be taken from that series and put into these lower budget films. Examples of this was the portrayal of Tarzan as a generally non verbal character, the inclusion of Cheeta, Tarzan's chimpanzee side kick who never appeared in the books of Burroughs but who first appeared in Tarzan the Apeman (1932) and Tarzan's distinctive yell which, although having it's roots in the books, became embodied in the studio manufactured call featured in the MGM movies and forever after copied by school boys swinging on ropes into rivers. In both Tarzan the Fearless and Tarzan's Revenge, Tarzan is generally non verbal, has an unnamed chimpanzee side kick that viewers familiar with the MGM series assume is Cheeta, as well a cry that is reminescent of, though simpler than, that featured in the MGM series. Although each has a continuity outside of the MGM movies story line, both Tarzan the Fearless and Tarzan's Revenge fit well into MGM's conception of the character. This stands in contrast to Burrough's own cinematic production of Tarzan, The New Adventures of Tarzan (1933), which, although also featuring a chimpanzee side kick named Nkima, based on a monkey character in the novels, presents Tarzan as being a well spoken  and educated  English Lord who has a yell taken from the Tarzan radio show, a yell very different from the MGM version and featuring a word from Burrough's fictional ape language, tarmangani (white ape). If Burroughs sought to bring his character to the screen authentically, Lesser's version of Tarzan  was designed to go with the cinematic flow created by the MGM talky Tarzan films that had proven so popular with the cinema going audience of the 1930's.

If the MGM movies featured the Olympian Johnny Weissmuller as Tarzan, Lesser's Tarzan's Revenge, in traditional showman style, would present not one but two Olympic gold medalists, decathlete Glenn Morris as Tarzan and Swimmer Eleanor Holm not as Jane but as Eleanor. Lesser believed that Eleanor Holm was so well known by the public that they would never accept her as anyone else but Eleanor. When writing this over seventy years later, this seems ironic because my knowledge of Eleanor Holm comes not from her Olympic achievements but from her portrayal as Tarzan's mate. Surrounding the two inexperience leads, Lesser placed capable B movie director David Ross Lederman, an experienced cast of character actors,  Oscar winning film editor Gene Milford, a script that doesn't  take itself too seriously by Robert Lee Johnson and a romantic and energetic score made up of original and stock music. What comes out of this combination is a film that is in many ways an unofficial remake of Tarzan the Apeman, itself a loose adaption of the original novel. However it is a very different movie than the 1932 original and inspite of the elements borrowed from MGM, is not a carbon copy of the Weismuller series.(to be continued).
Posted by House of Castlestein at 04:27