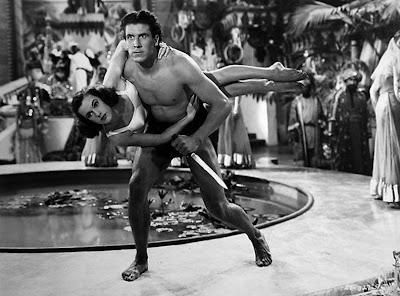 When producer Sol Lesser brought out his follow up to Tarzan the Fearless (1933), the new project, Tarzan's Revenge (1937) was in many ways a remake of MGM's Tarzan the Apeman, itself a loose adaption of the original Tarzan novel, Tarzan of the Apes (1912) that was first adapted for the screen in 1918. The basic stories of the two films is similar, a father, a daughter and her potential love interest enter the African jungle in search fortune and glory, come across Tarzan who rescues the daughter and her family from various jungle perils. In the process of this, the potential love interest becomes jealous of Tarzan and tries to protect the girl from the wild man, to whom she is increasing attracted. After one final rescue from a hostile force in the jungle, the girl stays with Tarzan in the jungle, while the main romantic rival and any other survivors of the party return to civilisation with their primary mission accomplished. Aside from these basic narrative similarities some of which can be found in the original novel, these two movies are vastly different in tone, the latter reflecting the general shift of the MGM productions away from adult movies to more family oriented affair.

Tarzan the Apeman is a film that is quite grim in many aspects. We see Jane (Maureen O'Sullivan) come to Africa from England to join her father, James Parker (C Aubrey Smith). Here she meets Harry Holt (Neil Hamilton), her father's partner, who is attracted to her and who could be the leading man if the story did not have another more masculine character waiting in the wings. She joins her father and Holt in an expedition to scale the mysterious Mutia Escarpment in an effort to find the legendary Elephant's Graveyard. Here they run foul of a tribe of pygmies/dwarfs and eventually come across Tarzan (Johnny Weissmuller), who is very taken with Jane and saves her from the pygmy attack. Eventually Parker and Holt find Jane, one of Tarzan's ape friends is shot and killed, Tarzan is injured by Holt. To make things worse Jane, her father, Holt and their party are captured by the pygmies and thrown into a pit containing a hideous vicious gorilla. However Tarzan saves the day and rescues the three white protagonists, the remaining native bearers having perished at the hands of the gorilla. Now Tarzan, Holt, Jane, and her mortally wounded father finally arrive at the elephants burial ground in time for James Parker to see the treasure he'd travelled so far to find. Fittingly, this old man of the jungle passes away in the elephants graveyard, joining with the other jungle dead. Soon Holt is heading back to civilisation with his treasure of ivory and Jane is staying with Tarzan.

In many ways Tarzan the Apeman is a tragic story. Although the romantic leads survive, so much pain is experience along the way. Jane comes to the jungle seeking to be reunited with her father, only to lose him. James Parker, climbs the Mutia escarpment to find a new life but discovers only death. Holt seeks to win Jane's affections by protecting her but manages to push her away even further into the arms of Tarzan. Tarzan is injured by Holt and loses a member of his ape tribe. The seemingly expendable native bearers all meet horrible ends in various ways. No one is left untouched by tragedy and sadness. However in the end Jane finds family in the arms of Tarzan and Holt heads off to organise the recovery of the ivory, which brings a note of hope for the future of all the surviving characters.

In stark contrast to this film is Tarzan's Revenge. Here the tone of the movie is completely different. Instead of a lonely Jane coming to Africa seeking family, this movie has Eleanor Reed (Eleanor Holm) coming to Africa with her family, father Roger, mother Penny  (Tarzan's first mother-in-law), fiance Neville and their man servant Jigger (Corbet Morris). It is a  holiday/expedition by a wealthy American family seeking to capture rare animals to take back to America for a zoo. The mood is light and fun, with much of the dialogue full of light comedic banter, as the various family members involve themselves in games of verbal one upmanship. The performances by the Reed family are comedic, even Eleanor's, as they trek through the wilds of Africa like fish out of water. They are not the hardened explorers of Apeman but tourists continually inadvertently walking into danger; nearly causing elephant stampedes, stealing lion cubs and attracting the attention of the mother and falling for tales of imaginary 'white crocodiles'. They even manage to upset the local jungle sheik, Ben Alleu Bey (C Henry Gordon) on the boat before even setting foot in the jungle. It is this latter event that causes the sheik to notice Eleanor and begin to hatch a plan to make her part of his harem.

Eleanor first comes across Tarzan (Glenn Morris) when she falls into a marsh while walking through the jungle with Nevin. In a funny turn of events, Nevin goes for help, Tarzan pulls Eleanor out of the marsh only to push her back in after a shoulder slapping match that ensues when she objects to him touching the mud on her leg quizzically. It's a farcical moment that is a far cry from the more brutal kidnapping and inspection that Jane initially receives at the hands of Weissmuller's Tarzan. In Morris' Tarzan we see the gentle jungle joker that Weissmuller's Tarzan would eventually evolve into as his series progressed into more family oriented fair.

One reoccurring gag in Revenge is the idea held by Eleanor's family, that Tarzan is a figment of Eleanor's imagination. For much of the film they are unaware that Tarzan is watching over them and frustrating their efforts to capture and keep wild game. It's after he releases the captured animals that they realise the truth of his existence, Nevin decides Tarzan needs dealing with and Eleanor begins her romance with him, as Tarzan carries her off into the jungle for some tree top cuddling and a spot of swimming.

Secretly leading the safari towards the palace of Ben Alleu Bey is Olaf (Joe Sawyer), the Reed's jungle guide, who has been employed by the villain to deliver Eleanor into his hands and into his harem. This he does successfully. Instead of the final peril that galvanises Tarzan as the hero to the safari coming from a threat that is totally alien and savage (pygmies that kidnap and offer their victims into the lethal arms of a hideous wild beast), the threat here has followed and lured them into the jungle, is surrounded by luxury and instead of offering its captive to a wild animal, puts on what is probably the first dance number in a Tarzan movie.

As in Apeman, Cheeta, having witnessed the kidnapping of Eleanor, informs Tarzan and he comes to the rescue, saving the safari from Ben Alleu Bey's men and storming the palace. It must be said that between the two Tarzan's, Weissmuller has the greater screen presence and acting ability, however Morris looks the part and his Tarzan truly comes to life in the action scenes. One of the best examples is when Tarzan runs into the court of the sheik, picks up Eleanor under his arm with seemingly effortless ease and runs out with her. Unlike Weissmuller, his horde of elephants and bigger budget, Morris' Tarzan saves the day single handedly, cutting the rope bridge from Ben Alleu Bey's palace to ensure his and Eleanor's escape.

The finale of Revenge sees Eleanor's family intact, mother approved fiance and all, leaving Africa with their load of captured animals. As it was with Holt in Apeman, it is clear that Eleanor has chosen Tarzan over Nevin and intends to stay in the jungle with him. Now Nevin, spurred on by Eleanor's mother, finally takes a shot at Tarzan, only to be quickly overcome by the apeman. Eleanor is leaving her family to be with Tarzan, not because there are none left but because she chooses to, and if not with her mother's blessing, her father's. The tragic and serious approach  of Apeman is eschewed, dance number and all, towards a more light and comedic approach in Revenge. The journey into the mysterious escarpment populated by brutal natives who seek to destroy all outsiders is exchanged for a family safari into the jungle populated ultimately by another group of people that want to make Eleanor apart of their family, whether she likes it or not.

The approach of Tarzan's Revenge is similar to many modern action films that take a tongue and cheek approach to action adventure. The seriousness of the threat and the action is tempered by ongoing comedy amongst the main protagonists. Later films of the of the MGM series pick up on the family element of Revenge, and with the introduction of Boy, the more adult elements of the series disappear in favour of a more family oriented approach. However the tongue and cheek approach of Revenge wouldn't be seen again in the series until Tarzan in Manhattan (1989), when trying to reintroduce Tarzan to a modern television audience and taking stylistic cues from the successful Crocodile Dundee film series.


Although heavily influenced by the MGM series, Sol Lesser's second low budget foray into the world of ERB's apeman, Tarzan's Revenge, is a movie that has a distinct voice of it's own and prefigures some of the directions the main series would take in the coming years. Although in some ways it is an inferior and smaller movie to the cinema classics of the early MGM series, it is a fun, 'feel good' film that is light and entertaining, presenting a more family oriented Tarzan.
Posted by House of Castlestein at 04:16