Today I found myself spinning at 170km, stuck to a wall in side a large saucer shaped object. No it's not an alien abduction but a trip to Adelaide's annual Royal Show. The Australian equivalent of a state fair, the Show has personally been  a great source of fun and excitement, forming some of my earliest and fondest childhood memories. The Adelaide Royal Show began in 1840 and today continues to be a great mix of sideshows, junk food, produce and animals. As a child I remember spending what seemed like hours walking through the stock pavilions with Mum and Dad, hoping that we'd soon leave to find the showbag hall. Often things would go from bad to worse when my parents would stop to talk to friends and acquaintances they'd stumble across, making the anticipation so much greater. When we eventually got to the showbag pavilion it was like heaven.
Looking back there were several showbags that I remember fondly. I remember in about 1978 getting the Space War showbag full of faux Star Wars novelties. There was the inflatable 'laser sword', the jigsaw puzzle of Star Wars-esque space craft, a Space Wars badge, a Darth Vader-ish mask and black plastic cape. I remember many a fun time being the 'Dark Lord of the Sith' in the remaing days of the September holidays. Another winner was The Incredible Hulk showbag, which amongst other things, included a plastic mask, poster and parachute Hulk. I remember coming home that night and watching the Hulk on TV while playing with my Hulk toys. I could never work out why Ol' Jade Jaws needed a parachute but it was cool none the less.
It was in 1982 that I remember another fond showbag memory. This particular year they brought out a Doctor Who showbag. It came with a jigsaw puzzle, a badge, invisible ink, a cardboard T.A.R.D.I.S. model and a board game. Coming in at a dollar it was a cheap bag for the time and a gold mine for a merchandise starved Doctor Who fan. What was confusing though was that all the artwork reflected Doctor Who as it was in 1975, made all the more anachronistic in that the Doctor was now played by someone else. I later discovered that the board game had been part of a Weetabix cereal promotion in the UK in 1977 and that the showbag had originally appeared in Australian shows in 1978. Maybe the showbag people were cracking open the old stock. I didn't care, I had a Doctor Who showbag filled with images of my earliest memories of the show.

As I spun around like fruit in a blender, I reflected back on the series of events that had lead me to this moment. I remember walking through the gates with my family and looking down sideshow alley. There spinning in the distance was the Gravitron, that crown prince of fun fair flying sauces. As I gazed at its hypnotic motion, my sons said, 'We want to go on that, but only if Dad does'. After some initial protestations, I knew I needed to man up and take these boys into that swirling world that gravity forgot. Before I could change my mind, I walked up the gang plank of this pseudo-UFO and took my position against the wall inside. Within minutes I was plastered flat to the bulkheads as the machine began to spin. Feeling game, I started defying gravity, climbing backward, Spiderman-like, up the wall. Soon I was half way up, stuck like a fly on a windscreen but loving every minute of it. There I was with my boys, feeling like I was sixteen again, surprised that my coffee was staying down and having the crazy kind of fun only a sideshow, or NASA , can provide. As the ride finished, I staggered out, feeling like I'd been through the spin cycle of a giant washing machine and having loved every minute of it. 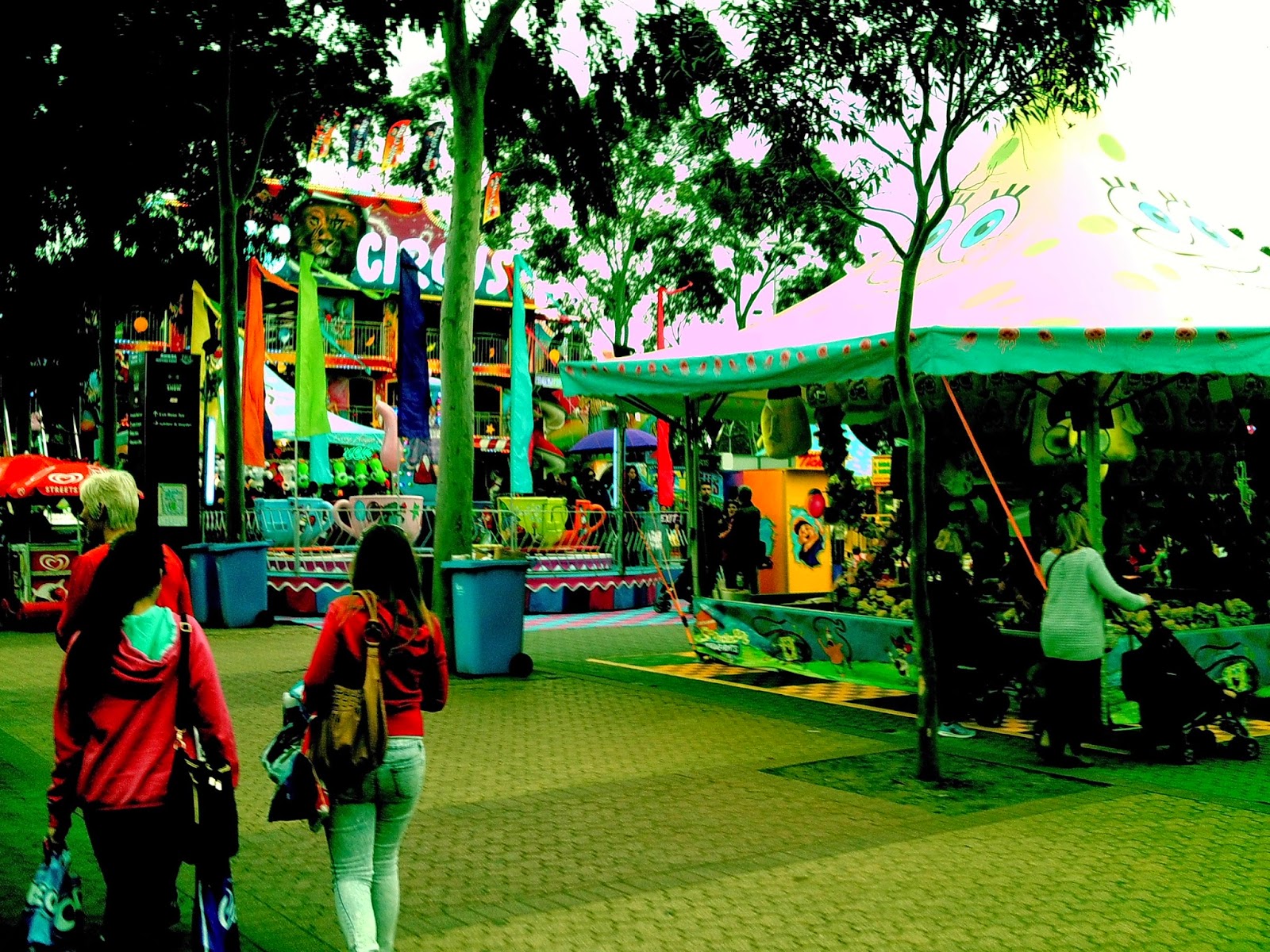 As the day went on, I continued to enjoy the time with my wife and children. We watched sheep dog demonstrations, dressage, patted farm animals, played games for soft toys and laughed at each other while we rode a variety of crazy amusements. I continued my fascination with the aesthetics of Ghost Trains, taking copious photos of the facades, but not daring to enter (no one else will go with me). Although the new ones looked cool, I missed the mechanical gorilla holding a severed head that stood on top of the old one (you can never beat the classics).

We ended the day with a ride on the ferris wheel which provided us with a great view of the whole showground.  As I looked at our pile of lolly and novelty filled showbags and the tired faces, I knew that the excitement and the fun of the day would only be over-shadowed by the sugar rush they'd feel when they started to eat the contents of their showbags. As I lent back and looked over the showgrounds, I felt happy and a little bit excited. Soon I would be home, sitting in front of the TV and exploring the contents of my Comic Collector's Showbag, filled to the brim with Phantom Comics and promising even more hours of excitement. The Royal Show may end but the fun lives on.

Posted by House of Castlestein at 04:37