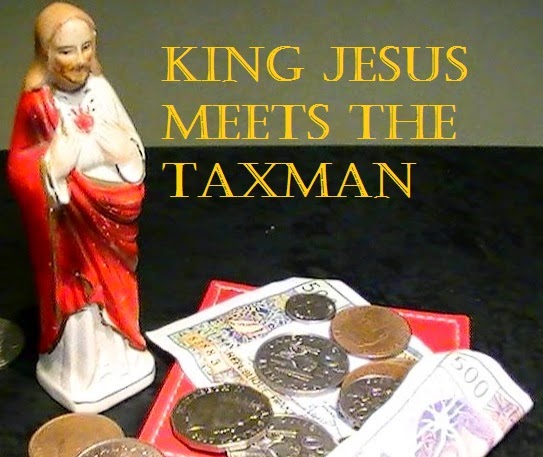 Zacchaeus stood there and said to the Lord, "Look, half of my possessions, Lord, I will give to the poor; and if I have defrauded anyone of anything, I will pay back four times as much." Then Jesus said to him, "Today salvation has come to this house, because he too is a son of Abraham. For the Son of Man came to seek out and to save the lost (Luke 19: 8-10)."

I have always been captivated by the story of Jesus' meeting with a particularly infamous man. Jesus was visiting Jericho, one of the great taxation centers of Palestine and while he was there he came in contact with Zaccheaus, a tax collector. Tax collectors, not unlike today, were severely disliked and had the ability overcharge people, taking advantage of their position as Roman representatives. The amount of monies due was often unclear and the chief tax collector was paid by what he could collect on top of the required taxation. To add to the situation, the chief tax collector usually had minor tax collectors under him, who also relied on adding to the taxation required in order to receives payment for themselves. With such an open ended situation, corruption was inevitable and the reputation of the tax-collecting profession was abysmal. While Rome got its required amount to build the needed infrastructure, the subjects of the empire were taxed in a way that was unfair and exploitative. In Judea, the tax collector was also seen as a Roman collaborator, working with those who dared occupy a throne belonging to the line of King David. Tax collectors were hated plunderers of their nation, extortionists and traitors who were far from God. In the eyes of the general populace they were on par with thieves and murderers. If a person who pleased God was one who followed the laws given by Moses to the letter, then the tax collector was seen to be the antithesis. Most Jews knew that God despised tax collectors. If God was a King and good law-abiding people were citizen of his kingdom, then tax collectors were the kingdom's enemies.  One such chief tax collector was Zacchaeus of Jericho. It was while Jesus was visiting his town that Zaccheaus went to catch a glimpse of this travelling teacher who had a reputation of associating with 'tax collectors and sinners (Luke 5: 30).

Jesus entered Jericho and was passing through. A man was there by the name of Zacchaeus; he was a chief tax collector and was wealthy. He wanted to see who Jesus was, but being a short man he could not, because of the crowd. So he ran ahead and climbed a sycamore-fig tree to see him, since Jesus was coming that way. When Jesus reached the spot, he looked up and said to him, "Zacchaeus, come down immediately. I must stay at your house today." So he came down at once and welcomed him gladly.  All the people saw this and began to mutter, "He has gone to be the guest of a 'sinner.'"(Luke 19: 1-7)

It was then the penny finally dropped for Zacchaeus. Whether it was a prior awareness of Jesus' message or a prompting from God, Zaccheaus showed himself to be a changed man. In a heartbeat of Jesus' loving acceptance of him, Zaccheaus set about showing that he was different. Where once he had behaved unjustly to others, he know showed that he had become a 'just' or righteous man, full of loving kindness to those around him. He had become 'born from above' or 'born again'.

Jesus said “I can guarantee this truth: No one can see the kingdom of God without being born from above. (John 3:3). In Jesus Christ, or King Jesus, the Kingdom of God had arrived and those who heard his message and obeyed him had a place in that Kingdom. With this came a renewed, reborn understanding of self, God, and the world around, based on love for one another. In this kingdom it was love that ruled, summed up in Christ's commands,

Dear friends, let us love one another, for love comes from God. Everyone who loves has been born of God and knows God. Whoever does not love does not know God, because God is love (1 John 4: 7-8).

This was the day Zaccheaus became 'saved', the day he knew that he no longer belonged to the old world, bound by injustice against others and God. It was the day he became a citizen of the God's world of loving kindness that was just beginning to blossom. As an outcast Jew, he knew it was impossible to follow all the laws given by Moses to the letter but he saw that Jesus offered a way of love that would fulfill that law in spirit and make him 'righteous' or 'just' in God's eyes. In fact all who followed the way of God through Christ could be set free from the chains of the past. Zaccheaus now traveled the path of love that would lead its very pro-claimer, King Jesus, to die in the place of all who deserved death for their injustices against God and others. The greatest act of love in history set us free so we could walk this world in love, representatives of the God's kingdom, in a world struggling under the Kingdom of Darkness to emerge into the light of love.

Posted by House of Castlestein at 21:26