Lifted up by Angels

One of the challenges of being a Salvation Army Officer is that you never know where you're going to end up. Just when you know where you are and what you are doing, the phone may ring and it may be time to pack your bags  and set your nose towards your next appointment.  It can be both unsettling and exciting as the possibilities of a new community and experiences begin to open up before you.  It can also be an immensely destabilizing experience, especially for those of us with less nomadic tendencies. It can leave you hesitant to get too close to people and content to merely skim along the surface of ministry, as the procession of appointments roll past. This is not only a dilemma of the Salvation Army Officer but of individuals in many other occupations. In fact if the gate is really swung open, it's just life. Often we're led into places we really don't want to go. From  unexpected illness to new dynamics in relationships, we sometimes find ourselves strangers in a strange land. Life reaches out, grabs us by the hair and drags us on.

One of my favourite passages from the Greek version of the Book of Daniel, found in the Apocrypha as Bel and the Dragon, is the place where the prophet Habakkuk is sent to to Babylon to help the prophet Daniel. In a repeat of the earlier incident under King Darius, Daniel has been sent once again to the lions den, this time for exposing the fraudulent practices and false god's of Babylonian religion. 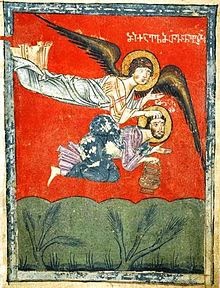 They threw Daniel into the lions’ den, and he was there for six days. There were seven lions in the den, and every day they had been given two human bodies and two sheep; but now they were given nothing, so that they would devour Daniel.
Now the prophet Habakkuk was in Judea; he had made a stew and had broken bread into a bowl, and was going into the field to take it to the reapers.  But the angel of the Lord said to Habakkuk, “Take the food that you have to Babylon, to Daniel, in the lions’ den.”  Habakkuk said, “Sir, I have never seen Babylon, and I know nothing about the den.”  Then the angel of the Lord took him by the crown of his head and carried him by his hair; with the speed of the wind he set him down in Babylon, right over the den.
Then Habakkuk shouted, “Daniel, Daniel! Take the food that God has sent you.”   Daniel said, “You have remembered me, O God, and have not forsaken those who love you.”  So Daniel got up and ate. And the angel of God immediately returned Habakkuk to his own place (Bel and the Dragon: 31-39, NRSV).

When I first read this, I really felt for Habakkuk. The poor old prophet is going about his business, caring for the labourers of his community, when he is ripped unceremoniously out of familiar surroundings and dropped off hundreds of miles away on the edge of a lions den. His good intentions had taken a left turn. The food meant for the labourers left in the Jewish homeland was now being used to feed a prophet living in the Babylonian captivity. To paraphrase John Lennon, life was happening while  Habakkuk was making other plans.

This is what life is like. All our best intentions can be turned on their heads with in minutes. Whether it be the call of God, an accident, a pay rise or redundancy, we need to make the most of where life drags us. The people I admire are those that make the most of where they find themselves. Like MacGyver or the A-Team, they take the rubbish of life and set it to work for the better. Whether it be a man with muscular dystrophy running the marathon, the quadriplegic movie star who uses his profile to raise awareness and fund research, or the parent who starts a support group for others after losing a child, they've all taken life's rubbish and turned it into something positive. No matter how bad your day or how rotten your circumstances, it's always within your power to make a difference to someone else. Sometimes all it takes is a kind word or action to make a world difference. We can't choose where life's angels take us but we can choose what we do when we get there.
Posted by House of Castlestein at 06:12