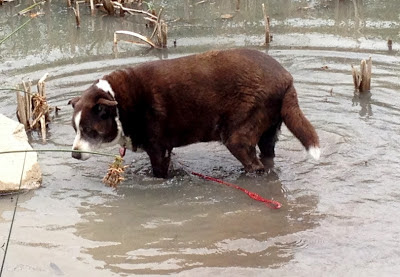 I walked through the foyer of the church, hammer in hand looking for the banner that I needed to hang out by the street. It was Red Shield time, the major fundraising appeal for the Salvation Army in Australia, and I had to do the usual things to remind the neighbourhood we were on the can rattling war path. As I bent down  to pick up the banner, I froze as a flashback from the past raced through my mind and I began to choke back the tears. You see, I knew that within minutes I would be saying farewell to one of my closest friends. 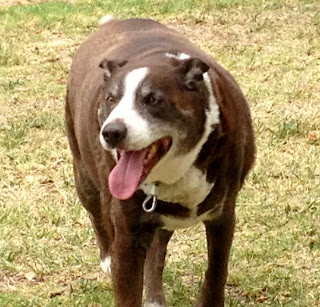 His name was Angus, a Border Collie/Staffordshire cross, and for 12 years he had been my pet, my protection, my playmate and my friend. We had bought Angus off some close friends when we were stationed in Western Australia. He was a brown, short haired, whirl wind of hyperactive fun. He loved to chase a tennis ball and run through the waves at the sea. He enjoyed playing with  the kids and sitting with the family while watching TV. He was a keen jogger and a prolific barker. He was a zealous protector of the house and was greatly loved by those who came to know his soft and cuddly personality. Some called him Angus, others called him the 'Angus Burger', some 'The Bear', to our kids he was Angy, but to me he was my 'Little Man' and 'Buddy'. He truly was man's
best friend and I'm going to miss him.

I remember the time we caught him sharing his food with our 1 year old daughter, two heads in one bowl. I recall the moment we caught them smooching behind the curtain, two pups together, one human, one canine. Recently he demonstrated his protective side, when he came to my children's defence in the face of an angry blue tongue lizard. I've heard my daughter tell accounts of how he would bark at any of our children who would decide to take a different route from the rest of the family group while out for a walk. If you threw a ball for him you were his friend for life. He was a good companion and a loyal mate.

Angus was a great a side kick. He was Robin to my Batman.  I remember the many times we responded to tripped alarms at the various Salvation Army Citadel's I've been posted at. He would come with me in the dead of night to face either the false alarm or the broken glass. 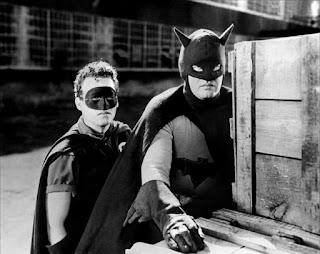 He was Cheeta to my Tarzan. I loved taking him running with me, although it frustrated me every time he'd stop and sniff the post of a letter box to check the 'wee mail' from other dogs. He was Pokey to my Gumby. I'll miss sitting on the floor folding washing, with him lying beside me, watching Z grade monster films together. He was Devil to my Phantom. I'll miss waking up in the night and hearing him lying on the floor next to my bed snoring, matching me nostril for nostril. He was Beppo the Super Monkey to my Comet the Super Horse (OK, I'm starting to run out ideas). He loved the beach, playing with the me in the surf and fighting over the tennis ball. 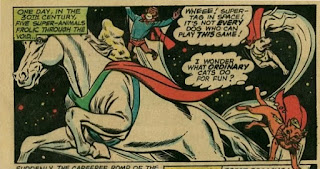 He was Azrael to my Gargamel (I promise that's the last one).  If I went, he wanted to go too. If I ate it, he wanted to eat it too.  If I got up, he got up too, but sadly, at the end, he couldn't even do that.

As the arthritis slowly consumed his joints, he found doing the things he loved harder and harder. On Wednesday we took him to the vet to get treated for the stiffness and pain, by Friday he couldn't even lift his head, let alone stand up. As I slept on the floor by his side through the night, I knew within myself that this would be our last night together as a man/dog team.  As I lay there, the sadness began to settle on me like a black fog, a fog that wouldn't be lifting any time soon. 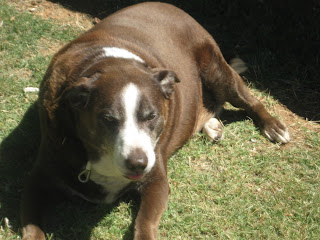 The morning brought no joy. As I walked through the foyer of the church, hammer and banner in hand, I remembered another Red Shield appeal 12 years before. I remember carrying a different hammer and a similar banner and putting them on the floor of my car and placing my new puppy Angus on the front seat. As we headed out to put the banners on fences around the town, my poor little Angus was car sick all over the front seat. I'd heard of the carrot fairy, but dear little Angus had been visited by the pen lid fairy. As I cleaned up the vomit and blue plastic with a nappy wipe, I knew that this was the beginning of a beautiful friendship. 12 years later I was putting the banner up by myself and I knew that I was at the end of one. Over come with the memory and it's resonance with the present, I put the hammer down, left the building and got into my car. Our 11.30am appointment was drawing closer. Soon he and I would be going for our last drive together, the long drive to the veterinary clinic of no return. Soon the Dynomutt to my Blue Falcon would be gone and I would return to put up the banner by myself. 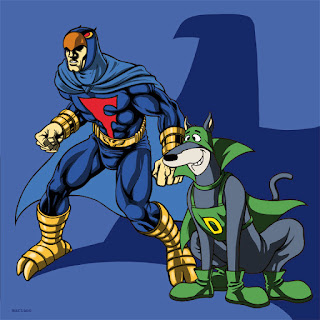 Farewell Man's Best Friend!
Posted by House of Castlestein at 05:28